In our first “professional” table top exercise, hub volunteers gathered to test out a Universal Communications Graphic Card. This is a tool being designed to help hub volunteers with communication barriers, such as another language, deafness or inability to speak due to shock. Deborah Witmer, the Vulnerable Populations Coordinator with Seattle’s Human Services Office, is working with community members to design the card and she coordinated the tabletop to test the draft version. She drew in members of the community who could give a real life test of the card and role players who convincingly played difficult roles.

It was two hours of hard work for everyone, and we learned a lot! Debriefing afterwards, we know we can work on improvements to the card and we will need to look at how hubs handle people with communications barriers; the use of the card to capture the message is only the first part of helping someone. We will be working on this before our July drill! 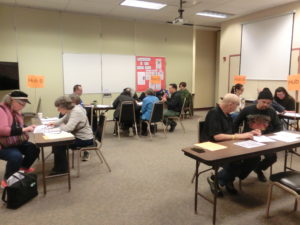 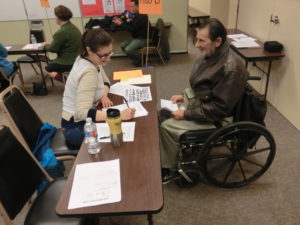 Amy, also from Eastlake, works to take an accurate message 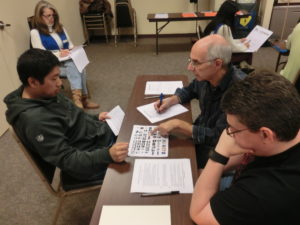 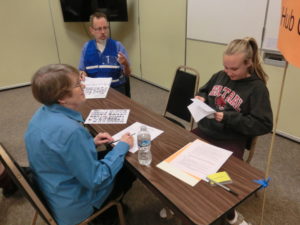 Martha from Ballard has one of the younger role players, who was an enthusiastic participant. Jim, in the blue vest, was one of the exercise Evaluators. 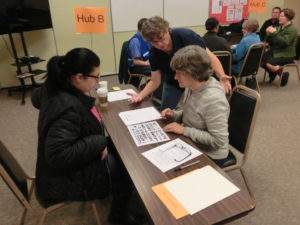 Part of the tabletop was to perform on the job training. Cheryl is training Melissa before a shift change. 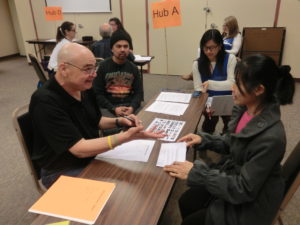 Mitch, from NE Seattle, and Orlando from the Beacon United Methodist Church Hub, were both participating in their first tabletop exercise.

This site uses Akismet to reduce spam. Learn how your comment data is processed.

Want to become a volunteer? Check out what it takes and sign up here!